Repligen purchased Atoll from UV-Cap GmbH & Co. KG on April 1, 2016 for a combination of $9.1 million in cash and 538,700 shares of Repligen common stock, for total upfront consideration of approximately $22.5 million. The agreement also includes a potential payment of €1.0 million, contingent on achieving a predetermined revenue target for the year 2016. The Company expects sales of Atoll products to add approximately $3.0-$3.5 million in revenue for the remaining nine months of 2016.

EC M&A acted as the exclusive financial advisor to Repligen on this transaction. 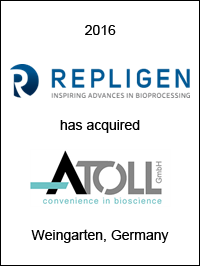